Nominations for the 2021 Winton Show Horse section are open now.

To enter into this section submit the nomination form and Horse Health Declaration available to download from this page along with your entry fee.

To enter into this section submit the nomination form and Horse Health Declaration available to download from this page along with your entry fee.

Nominations for the 2021 Winton Show Cattle section are open now.

To enter into this section submit the nomination form and Animal Health Declaration available to download from this page along with your entry fee.

To enter into this section submit the nomination form and Animal Health Declaration available to download from this page along with your entry fee.

Nominations for the 2021 Winton Show Wool section are open now. Nominations for the 2021 Winton Show Bushman’s Trial are open now.

Nominations for the 2021 Winton Show Pet Show are open now.

Nominations for the 2021 Winton Show Pavilion are open now.

If you wish to post items for exhibition in our Show, please remember to include a reply paid envelope so we can return them to you.

Nominations for the 2021 Winton Show Sheep section are open now.

To enter into this section submit the nomination form available to download from this page. 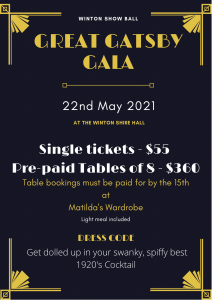 If you’re interested in promoting your business at the Winton Pastoral and Agricultural Show this year please complete and return the application form.

If you require power and water at your site, please indicate on your booking form.

James came into this world on the 5th March 1996 (a beautiful bundle of joy), in the Roma Hospital and grew up at Wirilla Winton. He was always just a happy boy and his love for animals started from a very young age. His first pony was Crystal (a Shetland) and then he went up in size to Pete (Welsh) and anything else that he could possibly get on. The photo below of him on the black horse was when they were both about 4 and James got him over to the fence and just climbed aboard. He first cantered unaided at 18 months on Crystal and it snowballed from there.

He got great enjoyment out of riding with other kids and sharing the joy of their achievements. By the time he was 5 he had found his love, Poppy, a plain little bay mare, they did everything together, along with his fox-terrier dog Trixie. James competed in mini camp drafts, gymkhanas and shows and used to saddle up on his own and go get the milkers in and chase pigs, sheep or anything he could round up. Because of James love for horses and enjoyment of helping other children ride, I felt the need for this award at the Show, to encourage all our fantastic local children to ride and enjoy the love of horses.

Tragically we lost James from this world on the 26th December 2001.

Beth’s love of horses began as a young girl with her train driving father dropping her off in paddocks full of horses outside of Rockhampton to walk through them to her Grandmothers place.

In her teenage years, Beth worked as a governess at Blue Range Station, outside of Charters Towers. The Cores were a big horse family who encouraged her to camp draft with the family. This is when Beth made the cover of Hoofs and Horns as a talented rider on the camp draft scene.

In 1959 Beth married Ron Axford another big horse person, so the love of horses just got bigger!

During 1960 Beth purchased her first Shetlands that she and Ron saw grazing next to the road at the BurdekinBridge between Charters Towers and Townsville. Loaded into the Landrover, Pedro and Princess were taken home to go alongside many plant, pack and race horses.

In 1970 Ron and Beth moved to Wooroora Station Ravenshoe, in North Queensland, growing their love of horses together with their three boys. They added a Palouse Pony Stud, Thoroughbred Stud, Shetland Pony Stud as well as dozens of plant horses for mustering. At this time they were show goers, promoting their horses in the Led in Classes, Western Pleasure, Stockman Challenges and many fancy dress events.

In 1980 Ron and Beth moved to Winton. Beth soon became largely involved with the Winton Show, becoming Chief ring steward for the horse events for a number of years, until becoming President in 1998. During that time she continued to breed many Shetlands under the Wooroora Shetland Stud banner at Kywong Station, between Winton and Muttaburra. Her Shetlands were sold all over Queensland from Sunshine Coast to Georgetown and as far out as Bedourie Hotel, but there were always some available for the Locals. Many of Beth’s horses were sent into Winton to be broken in by Bill and Rhonda Heslin and kids. Often any other kid in sight could be seen riding these very quiet ponies around the streets, or just to go and get an ice cream or drink, before the ponies were eventually sent off tho their new homes.

It made Beth proud to see her Shetlands all around town, giving kids rides at fetes, kids learning to ride at Pony Club and even having a Shetland Pony Steeple Chase at the Winton Show in 1991.Beth’s love of horses was for all horses big and small. When you added kids to that it really filled her heart with happiness, and being part of the Winton Show Society just came naturally.

Tania was a staunch supporter of the Winton Show. Tania loved her Handicraft and took great pride in her quilts, also offering her time throughout the show week preparing sections of the pavilion throughout the years. Tanias other love at the show was the horses and especially the pony/children’s section. She would never fail to help in the horse ring when needed and in Tania’s words, I help as long as I am in the Kids Ring.

Bob came to Winton from the Mitchell area in 1957. He drew a block on the Diamantina River and subsequently named it Tibourie. At nineteen years old his dream of becoming a cattle producer was soon realized, the land and stock becoming his major focus and passion. This property was the beginning of a long and successful life in the pastoral industry.

After fulfilling the conditions of his lease, he blended into the community and soon became aware of the need to assist in events in and around Winton. Among others, the Winton Pastoral and Agricultural Society became one of his favourite attractions. He was a committee member for many years and worked as a volunteer, mainly in the Cattle Section. Being a strong competitor, he nominated his cattle in most sections. Nothing made him prouder than being successful and worked harder to improve the quality of his cattle for subsequent Shows. Bob chose to become an ongoing sponsor for the Cow and Calf section until his death in 2017.

Throughout his membership of the WPAS, Bob was a volunteer, a committee member, served one term as Show President, and was bestowed with Life Membership.

Ian was a humble, generous man with a massive appetite for work. He had a vision, amazing stamina and was a true quiet achiever. Ian was not afraid to share his ideas and great knowledge of the land to inspire others around him.

Over the years he exhibited wool at the Winton Show. When the Show committee decided to hold a Led Steer & Heifer Spectacular in 2005, a Cattle Club was established to give Winton kids the chance to learn and participate in the preparation and showing of led cattle. Ian very generously donated six Santa Gertrudis heifers and feed to the Cattle Club. Later, at the Show that year, the heifers were auctioned and all proceeds were donated to local community groups or charities.

After Ian’s death in 2008, a memorial award was established by his family.

John OConnell came to Camara with his wife Jean and their five young children in December 1959. He was passionate about sheep and wool and at that time Camara ran mostly sheep and only had a handful of cattle. He maintained his owner classer wool stencil until his death in 1994 and used it every year when we shore the lambs and rams. He loved the Winton Show and enjoyed the camaraderie of the working bees, and said that it was hard to get on the committee early on because there were more people available than vacancies on the committee. He was the Chief Steward of the Sheep section for many years and had a lot to do with the Show Wether Production Trial which bolstered the wool section and the Shows finances as well. He had a quilt made from broad ribbons won by Camara sheep and wool at the Winton, Hughenden and Muttaburra Shows. It was a standard joke every year as Mr OC and I headed to the Show AGM, Mrs OC would shake her fist at him and say don’t you dare become the Show President! He became president of numerous district associations but he only became Chief Steward of the Sheep Section of the Winton Show! Clint Tucker Laffin was extremely passionate about his birds and poultry; breeding and showing them. Clint was very competitive as he travelled around the Central West Show Circuit. He always came away pretty pleased with his winnings and didn’t mind letting everyone especially other bird enthusiasts know how he went. Kim and the kids, on the other hand, weren’t as enthusiastic because they had to hold the poultry, mad roosters included, while Clint shampooed, blowdried and manicured them. Clint’s parrots were his pride and joy, in particular the Ring Necks and Alexandrines.